These custom cufflinks were created for affluent businessmen with distinctive tastes. The enamel jewelry cufflinks reflect my unparalleled artistry and workmanship. The contemporary designs are perfect for the suave and debonair gent who appreciates the best life has to offer. Boldly hued, unique, and stylish, these 18 K gold cufflinks are unique works of art.

These custom-made 18K gold cloisonné cufflinks were inspired by the waves of Hawaii’s North Shores. The ocean-blue waters capture the spirit of the ocean. 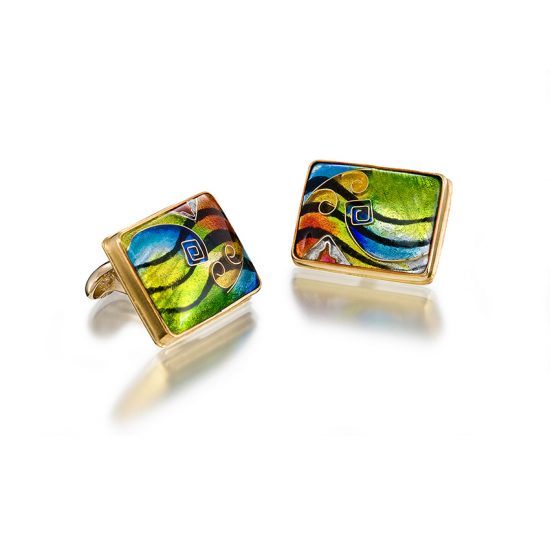 CUSTOM CUFFLINKS AND ENAMEL JEWELRY FOR THE FINER TOUCHES

Custom cufflinks are the primary jewelry adornment that distinguished gentlemen wear to complete their attire. But the modern cosmopolitan woman also appreciates the finer touches a beautiful set of cufflinks can bring. The ultimate cufflinks are those that are custom created just for you through the artistic enamel jewelry process.

CUFFLINKS FROM THE 17 TH CENTURY TO TODAY

Cufflinks date back to the 17th century and set a few trends along the way. Men then wanted a more stylish solution for their shirts. Traditionally, they had used ties and ribbons to hold the shirts of their cuffs together, as earlier shirts had no buttonholes to fasten the shirts. The earlier cufflinks used small chains that attached to a button and voila, the Renaissance designer fashioned the first cufflinks.

As time moved forward, the cufflink became a vital part of every noble gentleman’s wardrobe, particularly in formal attire. Cufflinks were no longer mere chains and buttons. They were adorned with precious metals and stones and were elegantly crafted and designed. An aristocrat dare not be seen without them!

The late 1700s to the early 1800s brought about change in the gent’s jewels. More cuffs were manufactured but designers sacrificed quality. Chains were replaced with rods, clips, and fasteners. Formal dress shirts were “cufflink-ready”, and record numbers of sales of both cufflinks and shirts were seen.

In the 1800s, the wearing of cufflinks began to extend beyond the well-to-do, and many men embraced the fashionable extension. Cufflinks were no longer for evening wear, and they were affordable to almost anyone.

The last century brought the introduction of ready-to-fasten buttons on shirts. While the overall production of cufflinks was down, the more refined names in jewelry paid no attention to the trends. Companies like Cartier and Tiffany continued to produce cufflinks.

Today, you can find almost any kind of cufflink and they’re not just for men anymore. Women have embraced cufflinks as a fashion accessory. And while you can find just about any cufflink you can imagine, there are no comparisons to custom cufflinks, which is a unique enamel jewelry set that is designed only for you.

YOU SET THE TREND WITH CUSTOM CUFFLINKS

When you commission me to create and design a set of custom cufflinks for you, you’ll get a set that will be seen nowhere else in the world.

I use the finest solid gold available to create my one of a kind artisan creations. But, what sets my custom cufflinks apart is that the gold backdrop becomes a canvas for a miniature art masterpiece. I use brilliantly colored enamels to create a stunning design that’s all your own. The final result is an exquisite enamel jewelry creation set in gold that will last for eternity.

Contact me to get your uniquely-designed custom cufflinks design started today!