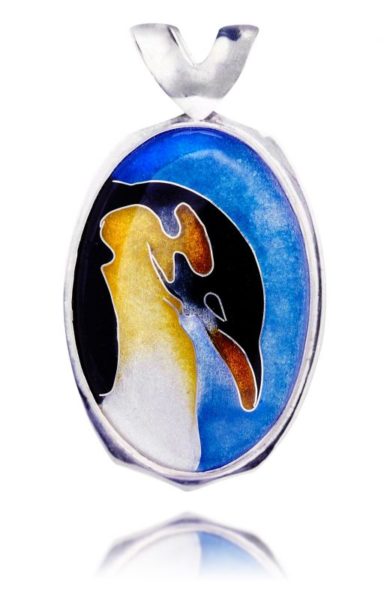 This Emperor penguin pendant was a custom cloisonné jewelry piece I created for a client. My client wanted a special gift for his wife and it was my pleasure to be able to design and create a lasting sentimental jewel that would convey his love.

The penguin is such an amazing animal! As humans, we’re pretty strong and endure many hardships. But, the penguin has a pretty challenging life worth commemorating. They’re so resilient and incredible.

The Emperor penguin is the largest of his species and calls Antarctica home. They can reach up to 4 feet in height and weigh up to 99 pounds. The flightless black and white bird acclimates to his environment by stiffening his wings and flattening his flippers for the marine habitat where he thrives.

The penguin lives off the fish and crustaceans of the frigid Arctic waters. It is able to be submerged underwater for up to 18 minutes and hunt for its prey in waters over 1,700 feet.

The Emperor is the only penguin species to continue breeding during the Antarctic winter months. The female lays the egg while the male incubates and keeps the offspring safe at its feet. Once born, both the male and female take turns caring for their young.

But, the Penguin Needs Our Help

In recent years, there have been concerns for our black and white feathered friends as global warming makes the sea levels rise and the Antarctic ice melts faster. As someone who loves our Earth and its inhabitants, this concerns me greatly and I donate a portion of my sales towards efforts to save our environment and the life within.

I’d love to share a poem about the Emperor:

The black and white Emperor

Holds his head towards the sky

And though he’s a feathered gent

He’d rather not fly

He waddles when he walks

And loves it when it snows

The antarctic is his kingdom

And the place he calls home

The Penguin makes a sound

And this my faithful friends

Is why I love the Penguin

The Emperor is a royal friend

Who loves a winter stroll

He’s the envy of his Empress

And his chicks are safe near his toes

But their snow-white kingdom

Snow becomes the past

It’s warmer than it used to be

But the sea is still his friend

His palace has not fallen yet

He believes the Earth can mend.

Let’s remember our endangered species. I donate a portion of my sales towards saving them!

Which Endangered Species Would You Remember Through a Cloisonné Jewelry Pendant?

Send me a request and let’s talk about your custom jewel project.