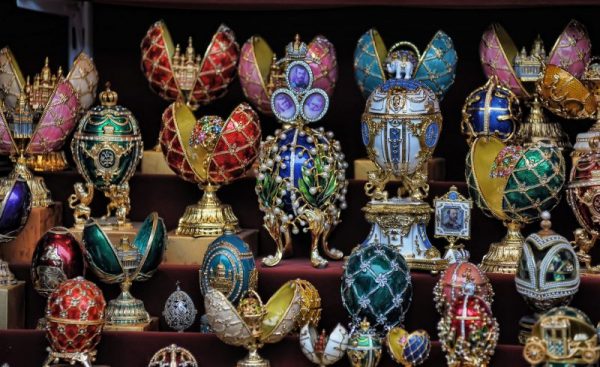 The history of Fabergé eggs is one that’s completely different than the one many of us associate with Easter. And it’s history is one of extravagance, luxury, and opulence.

The fun tradition of dyeing Easter eggs with our children and grandchildren has more humble beginnings. The decorating of Easter eggs as so many of us are familiar with dates back to the 13th century. Dyed Easter eggs represent new birth and new life and many Christians say it signifies Jesus’s resurrection.

As many Christians decorate their Easter eggs, it marks the end of a period of fasting. Then the Easter feasts can begin.

Fabergé eggs, on the other hand, were borne from a bold richness and a cornucopia of wealth. It’s the stuff that Hollywood movies are made of.

Fabergé Easter Eggs Were Anything But Conservative

In 1885, the Tsar Russian Emporer Alexander III enlisted the help of artist Peter Carl Fabergé to create a jeweled egg for his new wife, Maria. At first, the Empress wasn’t happy with her role. Her marriage to Fabergé was an arranged one. She hailed from Denmark and the move to Russia was hard on her as she missed her family greatly.

The Tsar wanted to do something to bring joy and happiness to his new wife for Easter. Thus, the first Fabergé egg was created and a tradition was born. Maria was more than delighted with the gift of her first Fabergé egg and there would be many more to come. From then on, two Fabergé eggs were made each year for ladies of the aristocrat – one for the wives and one for the mother.

From 1885 to 1916, fifty in all were created under the direction of Fabergé and his network of artists, goldsmiths, and silversmiths. Each was one of a kind, fabulously flamboyant, and sentimental to its recipient.

The Fabergé eggs, which became known as the Imperial Eggs, were richly designed and handcrafted in layers of enameled glass, lace metalwork, gold, and precious stones, including diamonds, pearls, and emeralds.

The Fabergé Eggs were diminutive, often three to five inches tall and opened, revealing a surprise within the egg.

One Fabergé egg seemed plain on the outside, but the inside revealed a golden hen inside the yolk. The hen sat on a bed of golden straw and hidden inside the hen was a diamond crown adorned with a ruby pendant.

No detail in any egg was ever spared. Fabergé eggs enthralled and fascinated its recipients by their beauty and workmanship.

One of the more extravagant Fabergé creations was the 1897 Imperial Coronation Egg, given from Nicholas II to his wife, Alexandra. The outer egg was made of gold and translucent yellow enamel with starburst designs, which represented the cloth-of-gold robe the Empress wore at her coronation.

Gold laurel leaves were mounted at each intersection and at the centerpiece of each was a rose diamond. A larger diamond was fashioned on the top of the egg.

But as was the case with most of the Fabergé eggs, this was only the beginning of the famed Imperial Egg. Hidden within was a velvet-lined compartment that held a miniature replication of the Imperial coach which transported Alexandra to her coronation.

Fabergé used translucent strawberry red and blue enamel to signify the upholstery. Six double-headed eagles rested on the roof and rose diamonds surrounded the Imperial Crown. Platinum tires, a diamond and gold trellis, and a diamond eagle at both doors further embellished the Imperial Coronation Egg.

The icing on the cake was the moving parts – doors that opened, wheels that moved, and even springy shock absorbers.

Many replications of the authentic Fabergé eggs have been made all throughout history. But, there’s nothing like the real thing.

The original Fabergé eggs have found homes all over the world. The Kremlin Armory has 10, nine are housed in the St. Petersburg Fabergé Museum, five are displayed at the Virginia Museum of Fine Arts, and the Metropolitan Museum of Art in New York and the Royal Collection in London each have three.

The rest are in either Switzerland, Washington, D.C., Baltimore, Ohio, Monte Carlo, Germany, and Qatar. Eight of the original Fabergé eggs are missing.

Today, authentic Fabergé eggs are worth millions apiece. One egg that was purchased at a flea market is said to be worth $33 million.

It takes a special kind of artist to be able to create something closely resembling a Fabergé egg. As an enamel jewelry artist, Patsy Croft can recreate Fabergé eggs into miniature pendant necklaces that are inspired by the artistry of Peter Carl Fabergé. 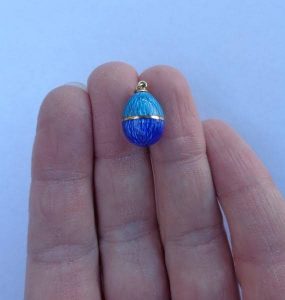 Patsy can create tiny, luminous, thimble-sized enamel pendants trimmed in 14KT or 18KT gold, artfully-designed to be yours. No two are the same, as is the case with all of Patsy’s custom jewelry.

For an even more sentimental touch, your Fabergé-inspired pendant can be adorned with an heirloom stone. Do you have a ring that’s been passed down through the generations but is too small to wear? Patsy can take the stones and create a new heirloom to be adored by future generations.

Alternatively, your custom Fabergé pendant can be designed with other precious stones – diamonds, sapphires, rubies, or pearls. Set up your custom jewelry consultation today to get your Fabergé-inspired masterpiece started today. 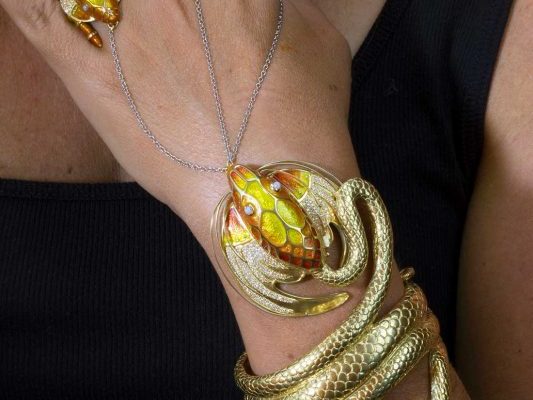 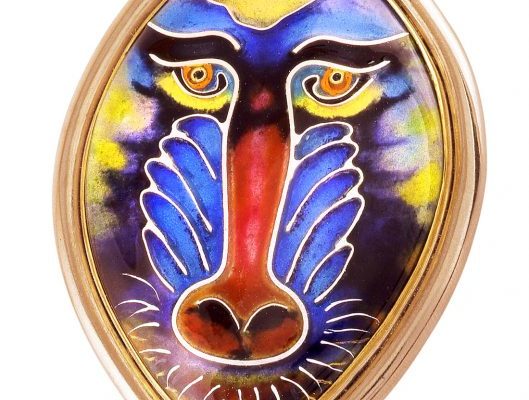