Cloisonne (pronounced cloy-zon-ay, French for ”partition”) is an ancient metalwork technique that makes use of small, precious metal filaments and colorful glass enamels to create brilliant artwork. The metal wires are bent into shapes to create small cells, (partitions) of designs. Coats of finely ground glass enamel are fired into them until one unique piece of art is rendered. Although it is most commonly used in cloisonne jewelry making, illustrations of the craft can be found in many facets of the art world. As a result of many applications throughout history, you can find hand-made dishes, vases, and abstract pottery.

One of the bedrooms takes up the entire top floor of the building, as it includes a large walk-in closet and several lounges. But the singer’s neighbors are actors Leonardo DiCaprio and Keanu Reeves. Lady Gaga praised Grande’s willingness to collaborate and admitted that she wrote the lyrics to the song “Rain on Me” right in the studio. The song in the style of dance-pop, which will be included in Lady Gaga’s album “Chromatica,” premiered on the night of Friday, May 22. The clip is promised to be released on YouTube at 20:00. Lady Gaga unveiled the new album cover “It felt so good to be a part of uplifting and true pop music again Ariana Grande plastic surgery the voice, because I feel like a minute has passed since I did something so clingy,” Grande said. “You know, this video is really cool, really fun. I’ve just never dressed like this in my life and had a great time,” Grande commented on the upcoming music video. In turn, Gaga praised Grande’s willingness to collaborate and confessed that she wrote the lyrics to the song “Rain on Me” straight in the studio. In the video the singers themselves appeared in the images of legendary spies, but each with her own character. Thus, the alluring Ariana Grande keeps her hands on the radio and watches the flying helicopters on the roof. Aggressive Miley Cyrus takes on the enemy in the boxing ring.

Though the art form’s origins are most likely Middle Eastern, Chinese cloisonne is the most renowned and permeated throughout the world. It became quite popular throughout Asia and Europe. Examples of the art can be seen in Byzantine mosaics, inside Saint Mark’s Basilica in Venice, and in prized Russian Czarist jewelry. You can find out more about techniques history on wikipedia. 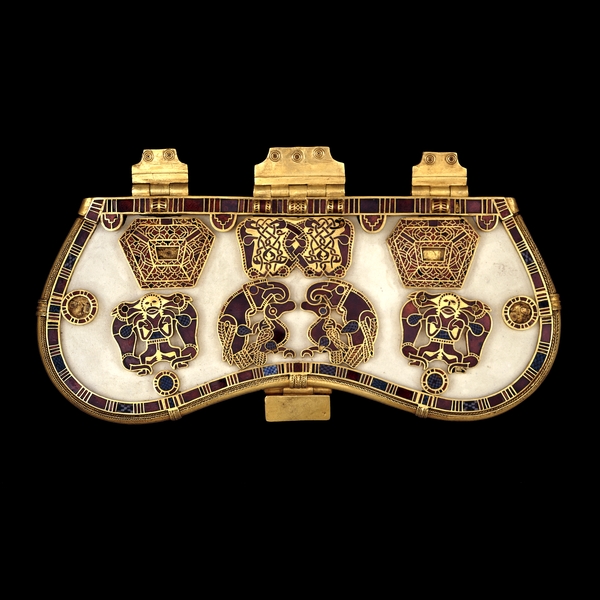 © Trustees of the British Museum

This purse lid is the richest of its kind yet found. The lid was made to cover a leather pouch containing gold coins. It hung by three hinged straps from the waist belt and was fastened by a gold buckle. The lid had totally decayed but was probably made of whale-bone ivory – a precious material in early Anglo-Saxon England. Seven gold, garnet cloisonne, and millefiori glass plaques were set into it. These are made with a combination of very large garnets and small ones, deliberately used to pick out details of the imagery. This combination could link the purse-lid and the shoulder-clasps to the workshop of a single master craftsman, who may well have made the entire suite of gold and garnet fittings as a single commission.

The plaques include twinned images of a man standing heroically between two wolves and an eagle swooping on its prey. These images must have had deep significance, but it is impossible for us to interpret them. The wolves could be a reference to the dynastic name of the family buried at Sutton Hoo – the Wuffingas (Wolf’s People). Like the eagle, they are perhaps a powerful evocation of strength and courage, qualities that a successful leader of men must possess. Strikingly similar images of a man between beasts are known from Scandinavia.

The most notable quality in Cloisonne is the art master’s exceptional attention to detail. A skill needed for creating unique designs from the tiny filaments of wire. Every design is handcrafted, which guarantees a matchless piece of art each time.

Designs of Cloisonné jewelry are often painted on paper with watercolors prior to beginning the process. This step is needed for estimating the appearance of the final product.

After the original artwork is decided upon, the metal ribbon-like strands of 24 karat gold wire are individually bent, twisted and oftentimes soldered together. As a result, a blueprint for where the colored enamels will later be painted is produced.

View the cloisonne process in action.

As a member of the enamel jewelry artists community, I have a lot of experience with creating jewelry. Over the years, I created awesome cloisonne pieces like “The Dragon”, which ended up in the Whoopi Goldberg jewelry collection.

For the list of awesome enamel jewelry I have made over the years, head to my portfolio. I make custom cloisonne jewelry as well, so if you have a creative idea – contact me and I can make it a reality.

Interested in buying some awesome cloisonne jewelry pieces? Treat yourself or someone you love with custom made earrings or pendants in my online store.
SHOP